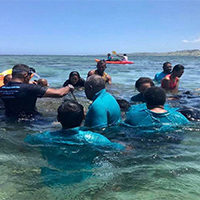 The Fijian Government’s investment in Sports Tourism, through the support of international sporting events, such as Fiji International, Super Rugby and Interhash, has laid the foundation to grow this high niche market and to further develop the nation’s ability to host such high-calibre events. Fiji has, over the years, secured rights to host events such as the PGA Fiji International Euro Tour, Standup Paddle Board, Asia Pacific Special Olympic Games, World Rugby Pacific Challenge, Oceania championships and a series of test matches among others.

The Fiji International continues to have a global presence confirming its position as an integral tournament in the South Pacific region, with the tournament being tri-sanctioned by the European Tour, ISPS HANDA PGA Tour of Australasia and Asian Tour.

Following its inauguration in 2016, the Investec Super Rugby match has become an annual feature in Fiji’s sporting calendar.  The hosting of one match of the Super Rugby series has made a significant contribution to the Fijian economy.

In 2018, Fiji hosted the Pulse Energy Highlanders against the Gallagher Chiefs on Saturday, 30 June. Being the third Super Rugby game held in Fiji, the event provided an opportunity to showcase Fiji’s capabilities in hosting such a big event. Aside from the other 55 million viewers from 150 countries around the globe, benefits spread across various sectors directly and indirectly to those who provide support services as well as Increased the global branding presence of the “Fijian Made-Buy Fijian” Campaign and the “Fiji Where Happiness Finds You” brand.

Interhash is a biennial, non-competitive event, the largest of periodic international Hash House Harriers events, where hashers world-wide get together to run and socialize.

After actively bidding to host an Interhash event in Fiji for the last 10 years, in May 2016, with the presence of the Hon Minister for Industry, Trade and Tourism, Fiji successfully won the bid to host the event in Fiji from 24 to 27 May 2018. For the first time in almost ten years, the event has moved out of Asia which in itself is a milestone achievement for Fiji.

Through the Interhash, Fiji welcomed for the first time more than 1,700 international visitors in a single event from almost 60 different countries such as, Zimbabwe, Qatar, Portugal, Sweden and Barbados, to name a few.

The event attracted approximately 2,000 hashers from over 60 countries around the globe, participating over a period of 4-6 days. The event was headquartered in Nadi over 4-6 days at run sights including a number of locations such as the Sabeto Mountains, Nausori highlands in Ba, Abaca, Natadola and the Coral Coast.

Additionally, an estimated 550 participants took part in the Red Dress Charity run, raising close to FJ$40,000 for upgrade work at the Nadi Hospital.

The event was organised by Nadi Hash and supported by the Fijian Government.

The Ministry in its efforts to create awareness on Tourism development participates in the following annual events;

Hosted by Tourism Fiji, the event provides a cross-sectoral platform for partners in the tourism industry to engage directly with international buyers and travel trade media. The event has grown since its first year with a view of building a bigger and better tourism industry in a sustained and holistic way.

The World Tourism Day (WTD) celebration was initiated by the United Nations World Tourism Organization in the year 1980 which since then is celebrated every year on the 27th of September.

Over the years, the inaugural WTD celebration achieved its objective to create awareness of the various themes, provide a platform for our tourism stakeholders, private and public sector partners to promote their products and services and at the same strengthen industry network.

To commemorate this year’s celebrations on the day, the Ministry of Industry, Trade and Tourism visited the Samabula Senior Citizens Home and also carried out a general cleanup of the Home as part of its Corporate Social Responsibility exercise. The Ministry also successfully organised a capacity building Seminar, for the Suncoast Region, specifically targeting Micro, Medium and Small tourism enterprises (MSME).  The Seminar included presentations on the 2018 WTD theme of “Tourism and the Digital Transformation” and was attended by 22 MSME operators.